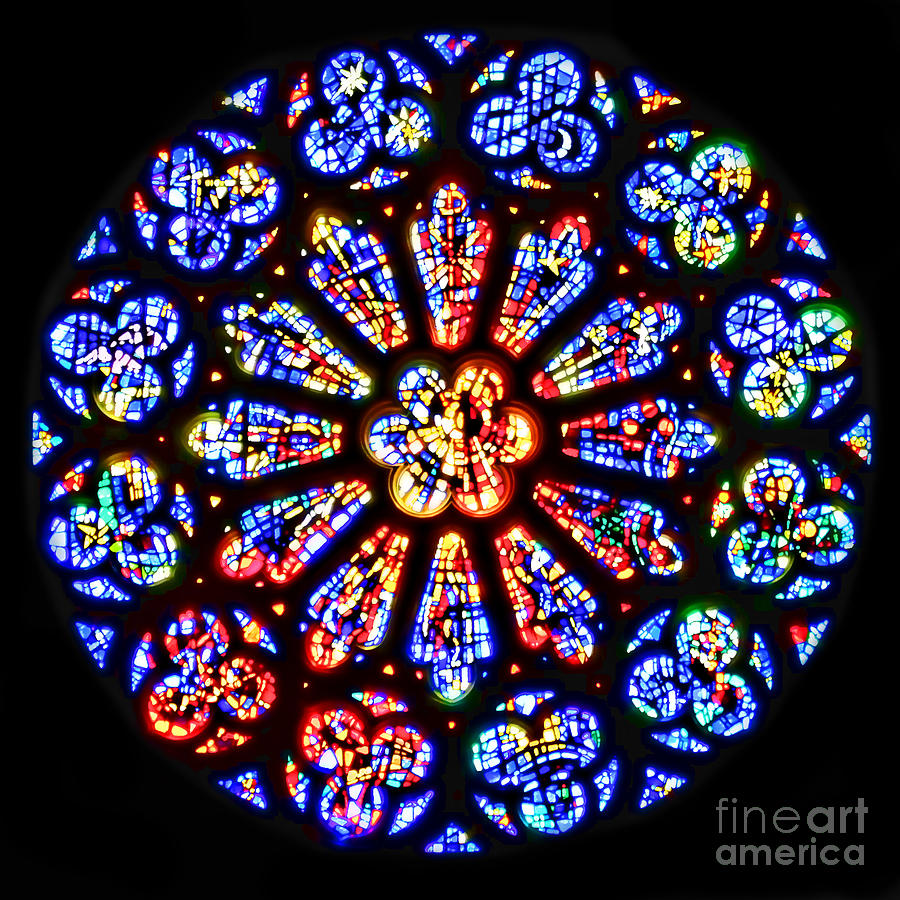 Grace Cathedral is considered one of the 12 most beautiful churches in America, located in San Francisco, Cailifornia in Nob Hill.
............
The Rose Window is the largest window in the Cathedral, made of 3,765 pieces of specially-faceted glass making the entering morning light sparkle, and it has a name: "Canticle Of The Sun", inspired by a poem of the same name by St. Francis of Assisi (San Francisco's patron saint), a song to G-d celebrating life and the glories of nature. The tracery design of the rose window was prepared by Weihe, Frick & Kruse, cathedral completion architects, based on the original design by Lewis Parsons Hobart (1929) with some minor modifications. It was given its abstract, fluid design (in contrast with the solid tracery geometry) and executed by Gabriel Loire of his famed Loire Stained Glass Studios of Chartres, France. It seems to be a happy coincidence that Loire was from the very town whose Cathedral's window shares the same pattern as Grace Cathedral's. The Window shares the same geometric construction which produces the different Rose Windows of Chartres and Grace Cathedrals begins with a circle and square, symbols of heaven and earth. For Chartres' window, the square begins sitting flat on its bottom. For Grace's (below), the square begins balanced on its corner.
...........................................
Grace Cathedral is an Episcopal Church in San Francisco's Nob Hill has a look reminiscent of the Notre Dame Cathedral in Paris. It was born of Grace Church which was founded in 1849 during the Gold Rush, and became a cathedral just in time to be destroyed in the Great Earthquake of 1906. Construction of the present structure, in the French Gothic style, was begun in 1928 and finished in 1964. Today, it's the third largest Episcopalian Cathedral in the nation. Grace Cathedral is a living cathedral especially known for its complete involvement serving the diverse San Francisco Bay Area, its "Gates of Paradise" front doors, its indoor and outdoor labryinths, stained glass windows, choirs, a 44-bell carillon and more. Today, it hosts over 3 million visitors each year, but you can also take a virtual tour of it.
...................................
The elaborate stained glass windows were inspired by biblical stories--the Passion, Crucifixion, and the Beatitudes are depicted in the St. Matthew window and the story of Christ healing the paralyzed man is shown in the St. Mark window. The masterpiece is the window illustrating the Twenty-Third Psalm (The Lord is my shepherd, I shall not want). It was created in the medieval style of presenting the scene from the bottom up, so that it symbolically rises to heaven. Grace Cathedral is also home to an indoor and outdoor Labyrinth, recalling a tradition dating back to France's Chartres Cathedral in 1220 when people would walk the winding path of the design as a way to release their troubles, meditate, and return to God's healing power. The Cathedral has been hosting celebrated authors and scholars ever since it was completed in 1964--Dr. Martin Luther King, Jr. preached here in 1965 and crowds reportedly filled the Cathedral, front steps, plaza, and parking lot. Archbishop Desmond Tutu, Jane Goodall, Isabel Allende, Carlos Santana, Sandra Day O'Connor, and the Dalai Lama have all been honored speakers at Grace Cathedral's Gresham Hall.
....................................
Lewis P. Hobart was selected as the architect with Ralph Adams Cram serving as design consultant. Cram was known as the preeminent architect of the Gothic Revival Style in the United States. The cornerstone was laid in 1910 but it wasn�t until 1964 that the Cathedral was dedicated! Construction began in 1928 and the new Chapel of Grace completed in 1930. The nave and
side aisles were partially completed when the Great Depression prevented further progress. A temporary steel wall was erected at the unfinished east end, now the narthex and entry to the Cathedral. The north tower was built between 1936 and 1941. In 1995, the cathedral close was completed after the building of the Chapter House, their parking garage and east end of the
Cathedral School.
............................
�When he got the commission to build Grace Cathedral � Hobart spent time in
Europe looking at large parish churches and cathedrals there and thought that
when people entered the cathedral... (they) should be struck first by the
whole and not by detail.�
............................
Notice that they cross the original (red) circle at twelve equally-spaced points around the it. Twelve-around-a-center is an archetypal form and worldwide symbol appearing in mythologies, religions, amphictyonies, arts, architecture, science and technology.

Great shot of this beautiful window.

Congratulations on this successful sale today!

Diana -- CONGRATULATIONS!! Your beautiful artwork has been Featured by the - CATHOLIC ART GALLERY - Fine Art Group on Pixels.com, a Fine Art America Company! Thank you for sharing it !!

Thank you Frank! It is truly a beautiful stained glass window.

Great photo.....and to think Grace Cathedral is just north of me. wonderful. Great feeling of Presence in Grace

Thank you Bill! Grace Cathedral has such a powerful presences within, even if you just sit is silence, it's glory is overwhelmingly wonderful!