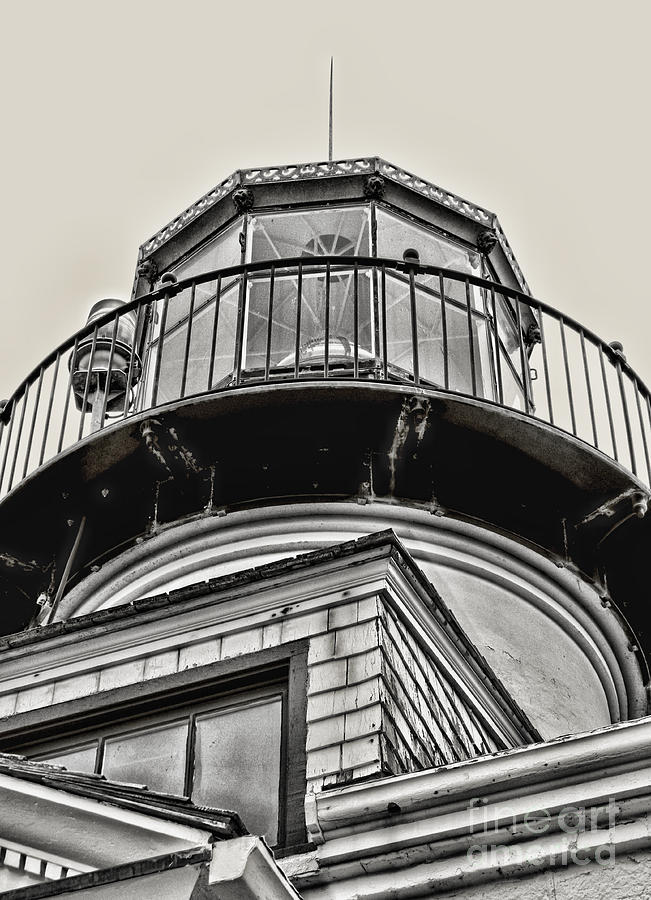 Point Pinos Lighthouse was lit in 1855 to guide ships on the Pacific coast of California. It is the oldest continuously operating lighthouse on the West Coast of the United States and even the lens is original. Alcatraz Island Lighthouse preceded Point Pinos by 8 months, but was replaced in 1909 by the expanding military prison. It is still an active Coast Guard aid to navigation. Museum exhibits and other functions are operated by the city of Pacific Grove, Monterey County, California. The lighthouse is surrounded by the Pacific Grove Municipal Golf Links.
.....
The light is a third-order Fresnel lens with lenses, prisms and mechanism manufactured in France in 1853. A larger, second-order light had been planned, but delay in shipment caused the present light, originally destined for the Fort Point Lighthouse in San Francisco, to be installed instead. The first light source was a whale oil lantern set inside the lens, whose tank the keeper had to climb the tower to fill several times a night. Whale oil was very expensive and was soon replaced by liquified lard oil which gave way to kerosene in 1880. At the turn of the century, an incandescent vapor lamp was used, followed by electric lights in 1919. From 1912 to 1940 a falling weight mechanism rotated a metal shutter around the light causing the beam to be cut off to seaward for 10 out of every 30 seconds. Thereafter a timed flasher provided the "on/off" characteristic.
.............
In 1874 Lighthouse Avenue in Pacific Grove, named for the Point Pinos Lighthouse, was laid out to ferry supplies and construction materials from the port at Monterey to the lighthouse.
......
The first lightkeeper was Charles Layton, appointed to the post at $1,000 per year. He was killed in 1855 while serving as a member of the sheriff's posse chasing the notorious outlaw, Anastacio Garcia. He was succeeded by his widow, Charlotte, who remained head lightkeeper until 1860, when she married her assistant lightkeeper, George Harris. Robert Louis Stevenson wrote of visiting lightkeeper Allen Luce in 1879 after a long walk through the woods from Monterey, praising Luce's hospitality, piano playing, ship models and oil paintings. He wrote about the light in his book From Scotland to Silverado.
........
The most famous lightkeeper was Mrs. Emily Fish, who served from 1893 to 1914. She was called the "Socialite Keeper" due to her love of entertaining guests at the lighthouse.

Congratulations on your recent sale, Diana!

Your artwork was published in the internet publication, ARTIST NEWS today. Thank you for your submission of this piece of work... Bob Johnston.

Thank you SO MUCH Bob and Nadine!!!!